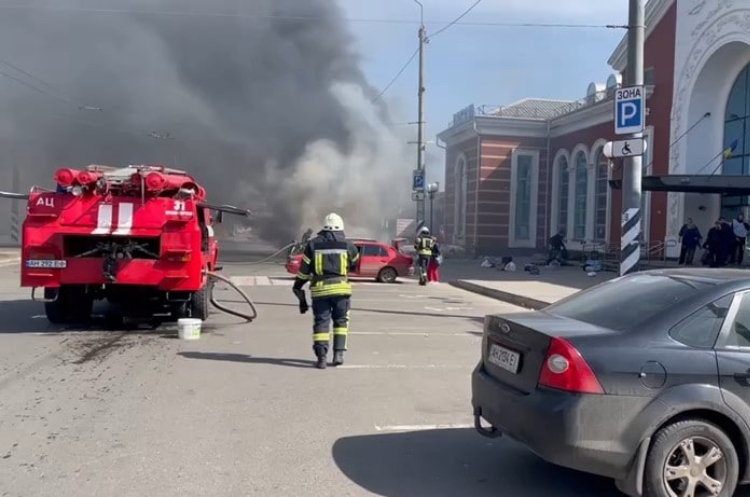 What happened. Today in the morning, the occupier's forces struck the railway station in Kramatorsk with an Iskander cluster munition missiles.

Details. According to recent reports, over 30 people were killed, and more than 100 persons were injured due to a missile strike on Kramatorsk. Thousands of people were at a railway station at the time as the evacuation of Donbas residents to safer regions of Ukraine took place.

"This is a targeted attack on passenger infrastructure of the railway and the residents of Kramatorsk," the Ukrainian railways' statement reads.

"Russian fascists knew perfectly well where to aim and what they want. They intend to take hostage as many civilians as possible and destroy everything of Ukrainian descent. The Russian Federation is a country of heartless beasts and criminals, and evil must be stopped and, most importantly, punished!" declared Kyrylenko.

"Military power is coming from Western Ukraine in the Eastern direction by railway, aggressive heavy armor, and artillery from Europe. Sometimes, I wish I could gift decision-makers with a classroom contour map of Ukrainian railroads. One glance would be enough to realize that you could cripple the railway connection for months with three pinpoint strikes at the most."

On top of that, Kanazkyi notes that social media instantly buzzed with the messages from Russians about an alleged strike on Ukrainian military men.

"As always, right after the attack on Kramatorsk railway station, Russians broke out in boasting about this 'heroic deed' on social media. They think that they have hit our military. The popular 'Siloviki' Telegram channel posted messages about this. Russian propagandist Dmytro Steshyn ('Russian Tarantas') and so-called Deputy Minister of Information of the DPR Danylo Bezsonov reposted on their channels," the journalist wrote.

"Ten minutes ago, Kramatorsk station was attacked by air. The concentration area of AFU militants was tackled."

Kazanskyi points out that as soon as the word leaked out that the missile targeted civilians and not AFU, the posts began to vanish.

In his turn, Advisor to the Head of the President's Office of Ukraine Oleksii Arestovych believes that a thorough target acquisition reconnaissance preceded the actual blow on the Kramatorsk railway station.

"What you need to understand is that a meticulous reconnaissance of the target carried out by, at the very least, unmanned aerial vehicles foregoes such strikes. You see, gunners on the ground are too expensive a missile. And it is too difficult and risky to organize such attacks," Arestovych writes on his Facebook page.

The mayor of Kramatorsk, Oleksandr Honcharenko, stated that in Kramatorsk, an emergency evacuation by vehicles began after a missile strike on the railway station.

"Today, we begin urgent evacuation of the locals using all the public and private transport. We are looking for drivers, and we will need around 30-40 of them," he informed.

Honcharenko adds that all residents of the Donetsk region who will be able to get to the town will be evacuated from Kramatorsk.

According to operational data, as a result of rocket attacks on the Kramatorsk railway station, more than 30 people were killed and more than 100 wounded.

It is a targeted blow to the railway passenger infrastructure and the residents of Kramatorsk.

Погода на sinoptik.ua
Last news
The invaders shelled the occupied Energodar, there are casualties
19:35
The Committee of the Verkhovna Rada supports the extension of martial law
17:10
Ukraine has changed its military strategy thanks to new weapons – NYT
11:06
Occupiers attacked Kharkiv Oblasts from the territory of russia
10:15
Kim: the command of russian troops in the Kherson Oblast left soldiers on the right bank of the Dnipro and is moving to the left one
22:30
The russians drove the Pion self-propelled gun with the flag of Ukraine to Energodar for provocations - intelligence
13:31
ISW: Ukrainian forces destroyed the last functioning bridge russian forces used to transport military equipment from Kherson Oblast
10:46
As a result of shelling of Kramatorsk, 2 people died and 13 were injured
20:54
The occupiers launched 5 missiles at Zaporizhzhia
20:39
Ukraine takes back bodies of 522 defenders who were listed as missing ones
13:59
All news
2036