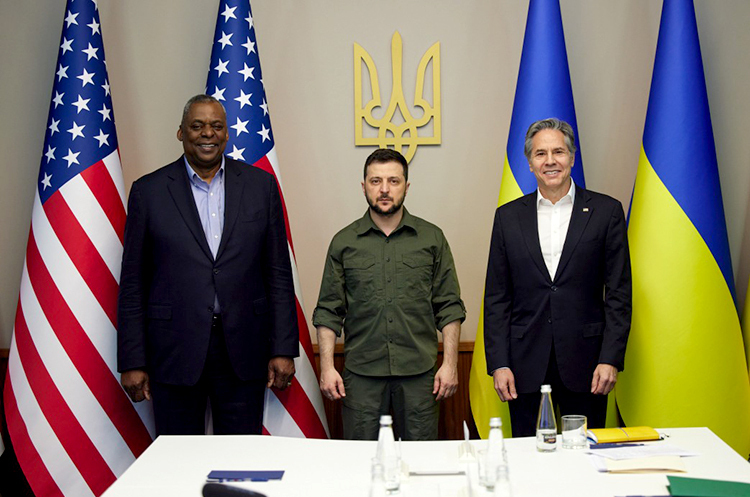 What happened? US Secretary of Defense Lloyd Austin and Secretary of State Antony Blinken announced new military assistance for Ukraine during a closed secret visit to Kyiv on April 24.

Source. This was reported by the American media with reference to a high-ranking representative of the State Department.

Details. CNN notes that Blinken and Austin have announced foreign military funding for Ukraine and 15 allied and partner countries worth $713 million.

The Associated Press reported that the United States will provide Ukraine with more than $300 million of military funding and approve the sale of weapons worth $165 million.

The new money, along with the sale of non-U.S.-made ammunition that is compatible with Soviet-era weapons, brings the total amount of American military assistance to Ukraine to $3.7 billion since the invasion.

Also during the meeting, Blinken said that US diplomats will return to Ukraine this week.

Previously. Earlier it was informed that the United States is thinking of transferring more than $300 billion of frozen assets of the Central Bank of russia to help rebuild Ukraine.

Погода на sinoptik.ua
Last news
The occupiers are trying to take control over the Bakhmut–Lysychansk highway –
19:13
Davyd Arakhamia in Lugano: Ukraine, together with its partners, should provide possibility of insuring risks for business during the war
17:32
European electricity prices reach record highs
14:48
russians attack the Dnipropetrovsk region with seven missiles – the Head of the Military Administration
09:00
The defenders of Ukraine make the enemy retreat after its offensive in the direction of the Vuhlehirsk TPP
19:24
The post-war reconstruction of Ukraine will consist of three stages – Shmyhal
17:34
The war in Ukraine may end in 2023 – Budanov
11:18
russian troops are going to throw all their forces to take control over the Donetsk region
08:40
Ukraine spends 130 billion hryvnias per month on the Armed Forces
20:30
The Armed Forces leave Lysychansk — General Staff
19:50
All news
5362