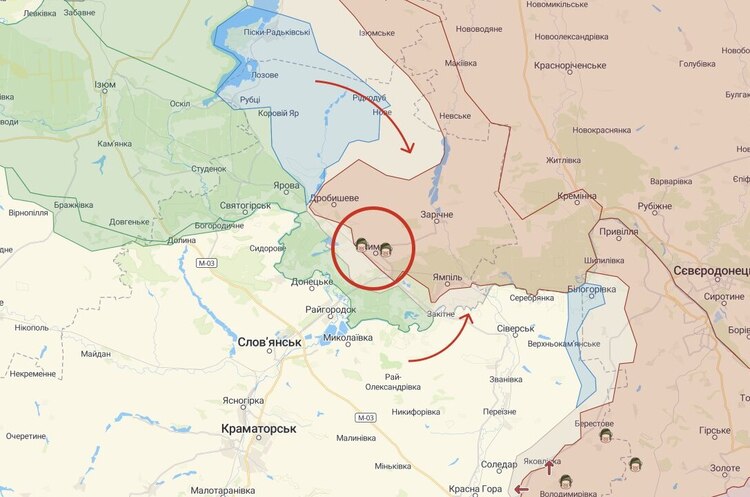 What happened? In the evening of September 29, the Armed Forces probably completed the encirclement of Lyman. Ukrainian troops broke through the defence of the russian federation and will be able to take the city under their control if the russians do not receive reinforcements.

Source. The report of the American Institute for the Study of War.

Details. “The Ukrainian Armed Forces broke through russian defences around Stavky, 10km north of Lyman, and cut the Torske-Drobysheve road that is the last supply and egress route for russian elements holding the line west of Lyman,” the report says.

It is noted that units of BARS-13 detachment and the 752nd Motorized Rifle Regiment of the 20th Combined Arms Army, which were defending around Drobysheve and into Lyman, found themselves in an “extremely difficult” situation.

Serhiy Cherevaty, the spokesman of the Eastern Group of the Armed Forces of Ukraine, said in a comment to “Hromadske” that the Ukrainian military was keeping almost all logistical routes under fire control.

Погода на sinoptik.ua
Last news
Putin says russia may resort to a new nuclear doctrine – preemptive strike
19:45
Shmyhal instructed to supply the population with electricity only after critical infrastructure, defence facilities and businesses
17:35
90% of trade industry of Ukraine resumed work – research
15:32
“We are all preparing for the reconstruction of Ukraine”: Polish-French Economic Forum has started in Krakow
13:51
Ukraine shipped 25 000 tonnes of wheat to Somalia within the GrainFromUkraine programme
12:47
The situation in the power system remains complicated but under control – Ukrenergo
12:32
Defence Forces repelled russian attacks in the areas of Bilohorivka, Luhansk Oblast, as well as Klishchiyivka and Maryinka, Donetsk Oblast
08:33
The Kyiv City Council renamed Druzhby Narodiv Boulevard and 31 other streets of the capital
16:02
The National Bank admits deterioration of the macroeconomic forecast due to new russian attacks on the energy infrastructure of Ukraine
15:25
Officially, the aggressor side reported only about “damage to the skin” of two aircraft
08:47
All news
963