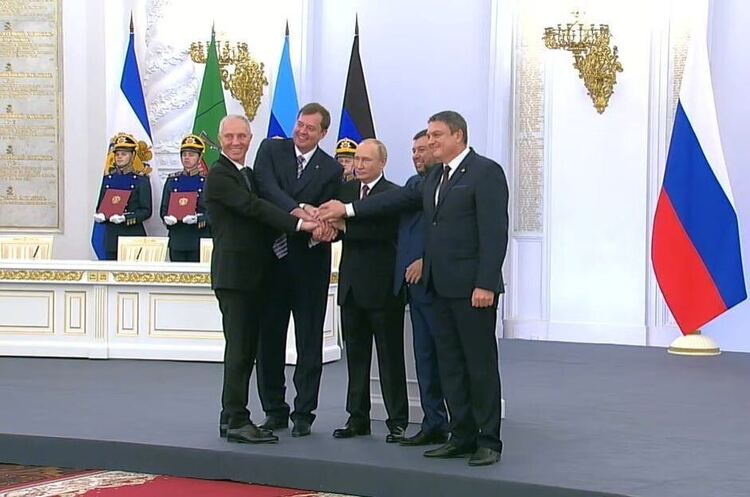 What happened? vladimir putin signed the “agreements on joining to the russian federation” of the occupied Ukrainian territories of Donetsk, Luhansk, Kherson and Zaporizhzhia oblasts.

Source. He announced this during his speech.

Details. The so-called signing ceremony was attended by high-ranking russian officials, including russian Defence Minister Sergey Shoygu and the head of the Chechen Republic, Ramzan Kadyrov. At the same time, Patriarch Kirill of the russian Orthodox Church was unable to attend the event due to a positive test for COVID-19.

“People have made their choice, an unequivocal choice. Today, we are signing the agreement on joining the DPR/LPR, Zaporizhzhia and Kherson oblast to the russian federation. I am sure that the federal assembly will support the constitutional laws on the adoption and formation of 4 new regions in russia, 4 new subjects of the russian federation,” Mr. putin said at the beginning of his speech.

According to the words of the russian dictator, in 1991, “the great country was destroyed.”

Mr. putin also claims that moscow is ready for negotiations with Kyiv. At the same time, he cynically “demands” from Ukraine to cease fire at the front while the russians are mercilessly shelling peaceful Ukrainians.

“We call on the Kyiv regime to immediately cease the fire and the war which it started in 2014. We call on Kyiv to negotiate, but we will not discuss the people's choice, as it has been made, and russia will not betray its people. We will definitely restore destroyed cities and towns, schools, museums, and factories. We will restore the entire infrastructure,” Mr. putin said.

Reactions. The Council of the EU issued a statement declaring that the European Union strongly rejects and condemns russia's illegal annexation of Ukraine's Donetsk, Luhansk, Zaporizhzhia and Kherson oblasts.

We do not and will never recognise the illegal ‘referendums’ that russia has organised as a pretext for this further violation of Ukraine’s independence, sovereignty and territorial integrity, nor their falsified and illegal results. We will never recognise this illegal annexation. These decisions are void and cannot produce any legal effect whatsoever. Crimea, Kherson, Zaporizhzhia, Donetsk, and Luhansk are Ukraine. We call on all states and international organisations to unequivocally reject this illegal annexation,” the statement said.

The president's office is preparing a response to Mr. putin's speech. The meeting of the National Security and Defence Council of Ukraine is currently underway.

The reaction of President Volodymyr Zelensky will be published in a video message, said the spokesman of the Office, Serhiy Nikiforov.

Погода на sinoptik.ua
Last news
Putin says russia may resort to a new nuclear doctrine – preemptive strike
19:45
Shmyhal instructed to supply the population with electricity only after critical infrastructure, defence facilities and businesses
17:35
90% of trade industry of Ukraine resumed work – research
15:32
“We are all preparing for the reconstruction of Ukraine”: Polish-French Economic Forum has started in Krakow
13:51
Ukraine shipped 25 000 tonnes of wheat to Somalia within the GrainFromUkraine programme
12:47
The situation in the power system remains complicated but under control – Ukrenergo
12:32
Defence Forces repelled russian attacks in the areas of Bilohorivka, Luhansk Oblast, as well as Klishchiyivka and Maryinka, Donetsk Oblast
08:33
The Kyiv City Council renamed Druzhby Narodiv Boulevard and 31 other streets of the capital
16:02
The National Bank admits deterioration of the macroeconomic forecast due to new russian attacks on the energy infrastructure of Ukraine
15:25
Officially, the aggressor side reported only about “damage to the skin” of two aircraft
08:47
All news
941