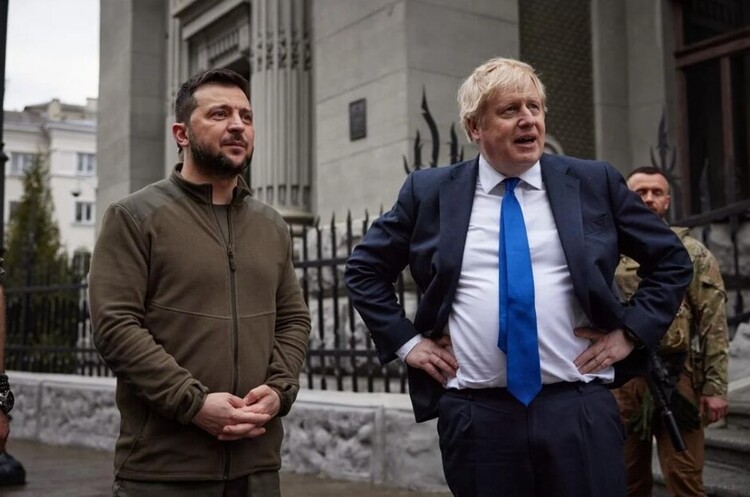 It is informed that the fleece jacket of the President of Ukraine Volodymyr Zelensky was sold at a London charity auction aimed at helping Ukraine for 90,000 pounds.

Source. This was reported by The Telegraph.

Details. It is noted that the auction was personally managed by the Prime Minister of the United Kingdom Boris Johnson.

“Boris Johnson has allowed that the price of clothing should be much higher than its starting price of 50,000 pounds, encouraging people to dig deeper and spend more,” it was said in a statement.

According to the publication, Johnson called the Ukrainian President “one of the most incredible leaders of our time.” At the same time, Zelensky, who spoke via videoconference before the Brave Ukraine tradings, praised Great Britain and the Prime Minister personally, calling him “brave.”

In addition, other lots were presented at the auction organized by Christie's, including a jug in the form of a rooster, given to Johnson during his walk with Zelensky in Kyiv. A guided tour of Kyiv by the Mayor Vitali Klitschko was also raffled off.

Previously. Maria Primachenko's painting was sold at an auction organized by Serhiy Prytula for half a million dollars.

Погода на sinoptik.ua
Last news
The occupiers are trying to take control over the Bakhmut–Lysychansk highway – General Staff of the Armed Forces
19:13
Davyd Arakhamia in Lugano: Ukraine, together with its partners, should provide possibility of insuring risks for business during the war
17:32
European electricity prices reach record highs
14:48
russians attack the Dnipropetrovsk region with seven missiles – the Head of the Military Administration
09:00
The defenders of Ukraine make the enemy retreat after its offensive in the direction of the Vuhlehirsk TPP
19:24
The post-war reconstruction of Ukraine will consist of three stages – Shmyhal
17:34
The war in Ukraine may end in 2023 – Budanov
11:18
russian troops are going to throw all their forces to take control over the Donetsk region
08:40
Ukraine spends 130 billion hryvnias per month on the Armed Forces
20:30
The Armed Forces leave Lysychansk — General Staff
19:50
All news
1537

The occupiers strike the Dnipropetrovsk region, there are damaged houses
6 july 2022
5612