mind
The enemy plans to resume offensive operations in the direction of Yampil – Siversk with the forcing of the river Siversky Donets – General Staff
NEWS
War
1197views
21 may 2022, 07:43 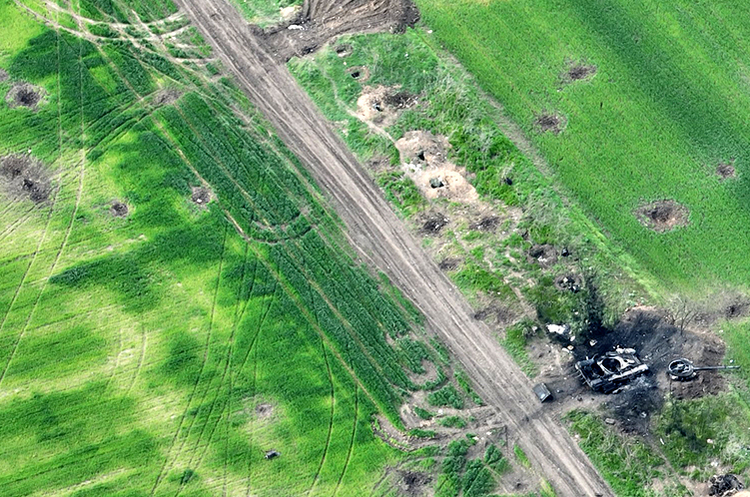 The General Staff of the Armed Forces of Ukraine released an operational update on the russian invasion as of 06.00 on May 21.

The 87th day of the heroic resistance of the Ukrainian people to a russian military invasion continues.

russian enemy does not stop conducting offensive operations in the Eastern Operational Zone in order to establish full control over the territory of Donetsk and Luhansk oblasts and maintain the land corridor with the temporarily occupied Crimea.

The shelling continues along the entire line of contact and in the depths of the defence of our troops in the Donetsk operational area and in the Slovyansk direction.

In the Volyn and Polissya areas, in general, the situation has not changed significantly. There is an increase in the system of electronic intelligence and electronic warfare in the border areas with Ukraine.

The threat of missile and air strikes on the objects of our State from the territory of belarus remains.

In the Siversky direction, russian enemy fired on the positions of the Defence Forces in the areas of border Ukrainian settlements in the Sumy and Chernihiv regions.

In the Slobozhansky direction, the main efforts of russian enemy are focused on maintaining the occupied frontiers. russian enemy launched air strikes on the village of Tsyrkuny.

In the near future, the grouping of russian troops in the Kharkiv direction is expected to be strengthened by units from the 1st Tank Army of the Western Military District.

In the Slovyansk direction, russian aggressor is trying to resume the offensive. In particular, to ensure the forcing of the river Siversky Donets plans to build a crossing.

In the Donetsk direction, russian enemy is conducting active hostilities in the Severodonetsk, Bakhmut, Avdiivka and Kurakhiv directions.

In the Lyman direction, russian occupiers plan to resume offensive operations in the direction of Yampil – Siversk with the forcing of the Siversky Donets River. In particular, in a certain area there is a concentration of special equipment for guiding the pontoon-bridge crossing. To strengthen the grouping of russian troops and intensify the offensive, russian occupiers are transferring additional units.

In the Zaporizhia direction, russian enemy fired on our troops.

In Mariupol, russian enemy is taking measures to restore the port. In particular, conducts demining of port infrastructure.

In the South Buh and Tavriya directions, russian occupiers focused their main efforts on maintaining the occupied frontiers, conducting reconnaissance, engineering equipment of positions and logistical support of troops.

In the Kryvyi Rih and Mykolayiv directions, russian enemy does not stop artillery shelling of units of our troops. There is an additional deployment of barrel and jet artillery units.

Ships of russian enemy's Black Sea Fleet in the Black and Azov Seas perform tasks to isolate the area of hostilities, reconnaissance and fire support in the coastal direction.

russian invaders continue to use terror tactics against Ukrainian civilians in the temporarily occupied territories. In particular, they prevent the evacuation of people from the Kherson region to the territory controlled by Ukraine and the opening of humanitarian corridors for the import of food, medicine and evacuation of the elderly, sick and children.

Eleven enemy attacks have been repulsed in Donetsk and Luhansk alone over the past 24 hours, eight tanks, three artillery systems, ten units of armoured combat vehicles, three special armoured vehicles and six units of enemy vehicles have been destroyed.

Погода на sinoptik.ua
Last news
The occupiers are trying to take control over the Bakhmut–Lysychansk highway – General Staff of the Armed Forces
19:13
Davyd Arakhamia in Lugano: Ukraine, together with its partners, should provide possibility of insuring risks for business during the war
17:32
European electricity prices reach record highs
14:48
russians attack the Dnipropetrovsk region with seven missiles – the Head of the Military Administration
09:00
The defenders of Ukraine make the enemy retreat after its offensive in the direction of the Vuhlehirsk TPP
19:24
The post-war reconstruction of Ukraine will consist of three stages – Shmyhal
17:34
The war in Ukraine may end in 2023 – Budanov
11:18
russian troops are going to throw all their forces to take control over the Donetsk region
08:40
Ukraine spends 130 billion hryvnias per month on the Armed Forces
20:30
The Armed Forces leave Lysychansk — General Staff
19:50
All news
1519

The occupiers strike the Dnipropetrovsk region, there are damaged houses
6 july 2022
5449