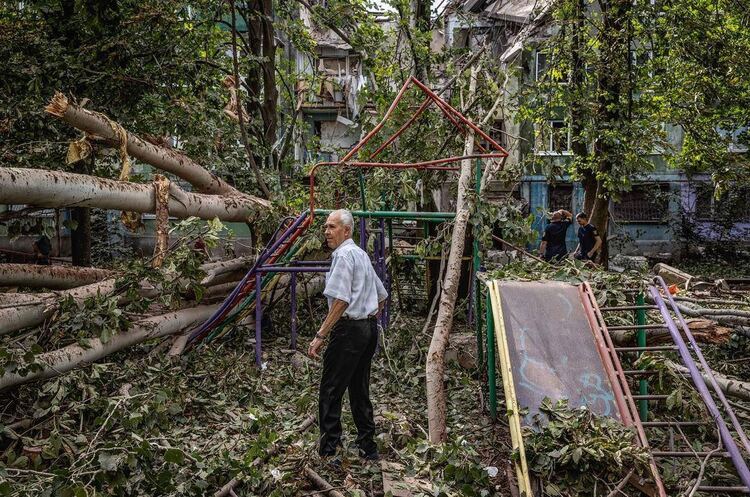 What happened? The russian occupiers attacked Nikopol with Grad MLRSs and cannon artillery, as a result, four people were injured, one of them was hospitalised.

Details. “The occupier struck residential areas of Nikopol. 20 missiles were launched from Grad MLRSs and 10 from cannon artillery at the city. According to preliminary data, four people were injured. One of them was hospitalised,” Reznichenko comments.

He notes that several private houses in the city were damaged as a result of the shelling. Several other buildings caught fire. Firefighters are working at the scene.

Погода на sinoptik.ua
Last news
2,500 Ukrainians are currently in russian captivity – Vereshchuk
16:37
Ministry of Reintegration: problems with access to treatment exist in each of the liberated communities of Kharkiv Oblast
14:22
Defence forces of Ukraine repelled enemy attacks in the areas of 6 settlements over the day
09:32
The condition of Ukrainian soldiers released from russian captivity is highly serious
21:33
Putin personally forbade the russian military to retreat from Kherson – NYT
13:30
The russians dropped chemical weapons on the positions of the AFU in Kherson Oblast
11:41
The President of the European Council proposed to exclude russia from the UN Security Council
10:47
The AFU reported the downing of six kamikaze drones and a Su-25 aircraft
20:42
The Armed Forces liberated the village of Yatskivka in Donetsk Oblast
15:35
The occupiers force residents of the occupied territories who received “humanitarian aid” to vote in a “referendum”
14:44
All news
1283

Ukraine is not going to be clan-oligarchic any more. What changes will be in the interest group pattern after the war
Aleks Moldovan - 21 september 2022
5110