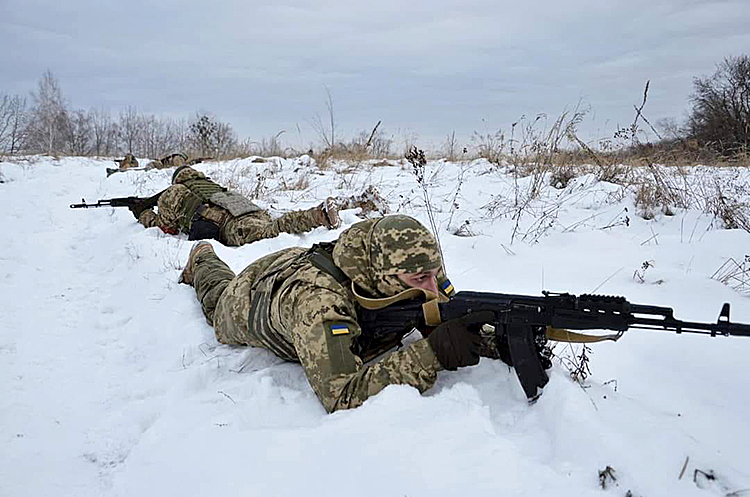 Image: General Staff of the Armed Forces of Ukraine

Despite general expectations, the war in Ukraine was neither short nor dynamic. Having tested Javelins, Bayraktars and other newest weapons in battles, both sides returned to the traditional three "infantry – tanks – artillery" and trenches in the style of the First World War.

"There is no question that the armies fighting today in Ukraine are more technologically advanced than the armies that fought on the Western Front in 1917. At the same time, there is little that an infantry or artillery captain from 1917 would find unintelligible about the fighting in the Donbas," says American military expert Robert Farley, a lecturer of security courses at the Patterson School.

Today, he said, the world is witnessing a long military campaign for the first time since the 1980s, during which both sides are re-equipping and retraining troops and changing tactics, creating new problems for the enemy.

The return to World War I tactics by the armies fighting in Ukraine has surprised and puzzled NATO Allies, whose armies have been preparing for "irregular warfare" in which they dominate the air and the enemy avoids large-scale battles.

"The extraordinary Russian offensive served as a necessary wakeup call for the United States and the West to prepare for the ugly necessities of this new era of great-power competition," writes John E. Herbst, director of the Eurasia Program at the Atlantic Council think tank and former US ambassador.

"The conflict illustrates that, while the United States has for years attempted to pivot away from its decades-long focus on irregular wars in the Middle East and South Asia, it has done far too little to prepare for the challenges posed by Putin’s eight-year war on Ukraine and by a decade of Chinese," John Herbs adds.

What has surprised experts about the war in Ukraine

For many experts it was a surprise that the air and water space was much easier to defend than to take over. Putin's army invaded Ukraine with a significant advantage in combat aviation and in the Black Sea, but, contrary to expectations, did not achieve decisive air superiority and was unable to implement a naval blockade of the Ukrainian coast.

Cheap man-portable air defense systems (MANPADS) make the enemy pay an exorbitant price for the use of manned aircraft. And anti-ship missiles, underwater and surface drones in the presence of accurate satellite data and air reconnaissance severely limit the capabilities of warships. A vivid confirmation of this was the escape of russian soldiers from the Snake Island and the sinking of the Moskva cruiser.

Many military analysts were also struck by the persistence with which putin's army is now storming the well-fortified Bakhmut, and earlier in the war, Chernigiv. In both cases, russian combat units were ordered to advance on the assumption that resistance would be weak. And even though commanders saw that these assumptions were wrong, they continued to send soldiers to break through the defenses and achieve their goals even at the cost of weakening their protection. This military culture is dangerous. Russian troops do not fall into the deadly traps described in Western military handbooks and often find ways to forge ahead.

What NATO armies have learned

The British military research institute RUSI has published a report summarising the first five months of the russian invasion (February–July 2022) before the Ukrainian Armed Forces went on the offensive. Having studied the data from the Ukrainian side, the authors identified five lessons for Western armies.

Lesson 1: Armies no longer have inaccessible sanctuary. The war in Ukraine has shown that the enemy can hit ammunition depots and maintenance areas at any distance from the front line. Thus, russian troops succeeded in hitting 75% of static defense sites from the air in the first 48 hours after the invasion, and in June the Armed Forces of Ukraine taught the enemy a lesson by destroying arsenals and military equipment remote from the front line with HIMARSs. As a result, both sides learned to avoid large losses of military property through its dispersal and disinformation.

Lesson 2: Warfighting needs a lot of artillery and ammunition stockpiles. Contrary to popular belief, in the first weeks of the invasion, when russian troops were surrounding Kyiv, Ukraine's situation was saved not by the Javelin anti-tank systems hyped for propaganda purposes, nor by Turkish tb2 drones, but by massive fires from artillery brigades. Ukraine had 1,176 barrel cannons and 1,680 multiple-launch rocket systems – more than the UK, France, Italy, Spain and Poland combined. The ordnance stockpile allowed Ukraine to bombard the enemy intensively for six weeks – far longer than almost any Western army would have been able to under the same circumstances.

Lesson 3: Armies need many more drones. Uncrewed aerial systems played a vital role in the war in Ukraine, although they were used primarily for situational awareness rather than strike missions. Troops critically need them across all branches and at all echelons. However, from February to July, the Ukrainian Armed Forces lost about 90% of the drones employed. The average lifespan of a quadcopter was three flights, and of a fixed-wing drone – six flights. Moreover, only a third of the missions were successful, and often the drone returns with nothing. With such statistics, the fleets of many European armies will be exhausted in a matter of days. Therefore, it is better to equip combat units with an armada of "attritable" cheap and simple aircraft, rather than tiny fleets of large and expensive systems.

Lesson 4: Armies need to learn to use precision weapons in conjunction with conventional weapons. Precision weapons, in particular the HIMARS, have shown to be very effective and more survivable with short "logistics tail." At the same time, high-precision missiles are scarce and can be defeated by air defense and electronic warfare systems. Therefore, armies should learn how to clear windows of opportunity in the enemy's defenses with inexpensive weapons to launch precision-guided volleys.

Lesson 5: Armies cannot rely on concealment and field fortifications. Concealment on the battlefields in Ukraine was exceedingly difficult, as a variety of optical cameras, motion sensors, thermal imagers, and electronic aerials became layered and could detect even well-hidden troops. Blindages and pillboxes also ceased to serve as good protection, as they tied soldiers to one place for a long time and were penetrated by modern means of destruction, especially high-precision ones. The best way to survive turned out to be dispersal combined with rapid movements that do not allow the enemy to detect troops. Therefore, armies should train for maximum dispersion and the ability to quickly assemble a strike force only under favourable conditions and only for the duration of the strike.

Погода на sinoptik.ua
Last news
Shmyhal ordered all power generators to be brought to Odesa within a day
14:27
Ukraine returns 116 captured Mariupol defenders, Kherson partisans, as well as snipers from Bakhmut
12:15
Adversary starts evacuation of population from temporarily occupied territories – General Staff
10:35
Ukrainian defenders eliminated 720 enemies over the day
09:29
Ukrainian lawmakers are suggesting to deprive the Cabinet of Ministers of its functions for authorizing export/import of military goods
18:25
Shopping centre burned down in Kherson due to night shelling
13:46
State Property Fund and Kyiv Oblast Military Administration launch project to help businesses assess war damage
12:31
Ukrainian operators have reached an agreement with European telecoms about accessible roaming
12:27
NBU: Almost 24 billion UAH in aid to the army received on special accounts during the war
12:07
The National Bank of Ukraine has forecasted that unemployment in Ukraine will decrease to 26% this year
11:50
All news