mind
The defenders of Ukraine make the enemy retreat after its offensive in the direction of the Vuhlehirsk TPP
NEWS
War
1029views
4 july 2022, 19:24 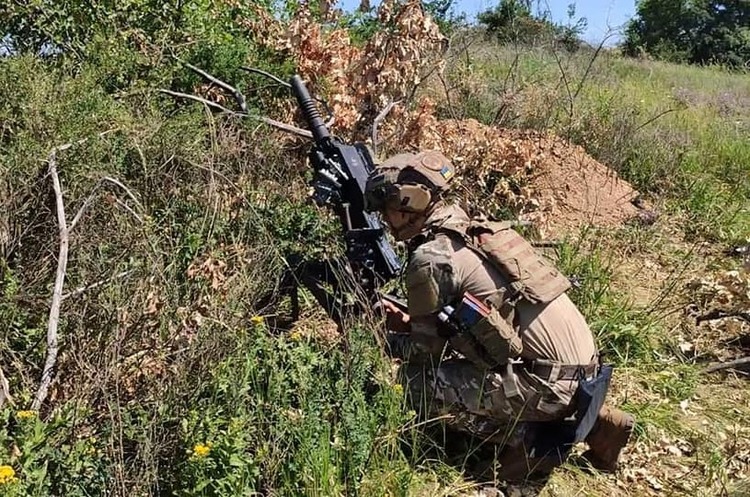 Source. This was reported by the General Staff of the Armed Forces of Ukraine.

Details. The situation has not undergone significant changes in the Volyn and Polissya directions. The units of the armed forces of the republic of belarus continue the fortification equipment of defensive positions in the border areas.

In the Siversky direction, the enemy shelled the areas of Vasylivske, Bilopillia and Atynske settlements of the Sumy region.

In the Kharkiv direction, the russian occupiers continued their artillery shelling of the city of Kharkiv and settlements to the north, northeast and east of it. The enemy also carried out airstrikes near Petrivka. Ukrainian soldiers harshly stopped the enemy's attempt to storm the village of Sosnivka and pushed the invaders back.

Trying to somehow interfere with the logistical support of the units of the Defense Forces, the enemy remotely mined the area near Cherkasky Tyshki. A counter-battery fight continues in the direction.

In the Slovyansk direction, the enemy is making attempts to improve the tactical position of its units. Conducted artillery shelling in the areas of Dolyna, Dibrivne, Bohorodichne, Mazanivka, Sukha Balka, Krasnopillya, Virnopillya, Velyka Komyshuvakha settlements, and also carried out airstrikes near Dibrivne and Bohorodychne. The enemy is conducting an assault in the direction of the settlement of Mazanivka, with partial success.

In the Donetsk direction, the occupiers are concentrating their main efforts on hitting our units with fire. The enemy conducted aerial reconnaissance using Orlan-10 UAV near Pavlohrad and Pokrovsk.

In the Kramatorsk direction, the aggressor shelled the areas of Bilohorivka and Verkhnokamyansk from tanks and barrel artillery. Conducted an airstrike near Tetyanivka.

Ukrainian soldiers successfully repelled the assault in the settlement of Bilohorivka. The occupiers left.

In the Bakhmut direction, enemy shelling from barrel artillery was recorded in the areas of Spirne, Berestove and Vershyna settlements. The enemy also carried out an airstrike near Vershyna.

In the Avdiyivka, Kurakhivka, Novopavlivka, Zaporizhzhia, and South Buh directions, the enemy did not stop shelling from tanks, mortars, barrel and rocket artillery along the contact line. On the latter, the enemy carried out an air strike in the area of Ternivka settlement.

In the waters of the Black Sea, in readiness for missile strikes on objects on the territory of Ukraine, the russian invaders keep three carriers of high precision weapons. The total volley is up to 20 Kalibr sea-based cruise missiles.

Ukrainian defenders inflict losses on the enemy in all directions where active hostilities continue.

russian occupiers, in order to somehow justify their destruction of civilian objects on the territory of Ukraine, continue to leak information about the location of military units in schools, churches and hospitals.

The General Staff urges people to trust information only from verified sources and not to spread russian fakes and disinformation.

Previously. The Ukrainian flag was returned to Zmiiny Island. Now the territory is again under the jurisdiction of Ukraine.

Погода на sinoptik.ua
Last news
A series of explosions occurred at the military airfield in Crimea – mass media
16:39
russians have failed to advance in Donetsk Oblast over the past month due to lack of infantry – British intelligence
09:40
Night in Nikopol: the russian army fires 120 shells from Grad multiple rocket launcher on the city
09:19
The first ship with Ukrainian grain reaches its destination
12:03
The Armed Forces of Ukraine once again strike the Antonivka Road Bridge – Operational Command South
10:26
The enemy keeps trying to attack Donbas, but has no success – the General Staff of the Armed Forces of Ukraine
08:30
The Armed Forces repulse an enemy assault near Virnopillia
20:25
The russians shelled the ZNPP again, one person injured
13:44
The russian army strengthens air defence in belarus – General Staff
09:34
The defenders of Ukraine destroyed at least six russian ammo depots in the Kherson Oblast – Operational Command South
10:38
All news
5513

The twilight of agroholdings: how the war transforms the agro-industrial complex
Vitaliy Kravchenko - 5 august 2022
3176